December 3, 2000
My mother was 12 years old during ww2 and soldier of the manitoba dragoons stayed with my mothers family for several weeks.My mother and.her younger sisters have very pleasant memories of these stayes. there was one soldier in particular that she is still talking about. The only thing she remembers of his name is that the other soldiers called him CURLY. She talks about this so often these days that i thought i wanted to try to find him.

The soldiers stayed in Dreumel at the family Nytmans somewhere around christmas 1944 ~ "CURLY" drove a tank ~ that's about all the information i have and i was hoping that amongst the soldiers who served in Holland during this period someone will remember a soldier with the nickname "CURLY" I hope that you will be able to help me.


July 11, 2000
Have been browsing your site and find it very interesting.  We have been trying to find info on a Horace Alfred Stratford who joined the 12th Man Dragoons at Woolsley Barracks in Winnipeg during WW1.  Can you send us in the right direction as to where we can find this info.  We have been to the Nat Archives and found nothing.  We have pictures of him in uniform, he was a bugler in the Cavalary Regiment and went to England and to Salsbury Plains.  Any help would be greatly appreciated.  Thanks  Kenneth Stratford

July 31, 2000
Hello, my name is jennifer zentner and I am looking for further information on my grandfather William Batt  and also if possible information on some of the missions he performed while in service. If you find any information please e-mail me at jenniferzentner343@hotmail.com thank you very much.

August 15, 2000
Hi
I am doing research for a book about the South African Constabulary.  The scanty records I have unearthed to date show a number of men who, on enlistment in 1901, gave their previous military affiliation as the Manitoba Dragoons.  They are:
Stephen J; McCowan J; Bellamy G; Moore JE; McDonald JG; Cook WJ; Steensom GE; Connolly AS; Fraser J; and Pierce W.  There was also a Hamilton JA who showed his previous affiliation as Brandon Infantry Company.
If you have any information on these former members I would appreciate finding out.  I am particularly interested in any reminiscences, letters home etc. describing their time in South Africa.  As you probably know, the SAC was used as a military unit from 1901 to 1902.  Some of these men probably served in South Africa with other units prior to joining the SAC.
I can be reached at:
email:  jwallace43@home.com
Tel: (204) 489-6977
Snail mail:  13-180 Victor Lewis Drive, Winnipeg MB, R3P 2E1.
I would appreciate any assistance you can give me.
Jim Wallace

My name is Barry Forster and my Grandfather (Frederick or Fritz Forster) served as a member of the Manitoba 12th Dragoons Regiment during the late 1890's and/or early 1900's in Brandon, Manitoba.  I have no idea of his rank or service number, how long he served, or what campaigns or manuevers he was on.   I have been told that the Veterans Affairs don't keep Pre WW1 records so they arew not a source of information.  Is there anything you can do to help me with information on my Grandfather's military records, etc.?

I am an decorated ex-US Marine (VietNam 1965 & 1966), my Father Bryan Lawrence Forster was in the RCAF in WWII Pacific Theater, and my Grandfather on my mother's side (John James Lyon) was a Coldstream Guard who was KIA in Rouen France in 1915.  I have got all of these medalsa and military memorilia in shadow boxes and I ran across your webpage and thought maybe you might be able to help me obtain some information on my Grandfather Frederick Forster.   I will greatly appreciate anything you can do.

Frederick Forster married Mary Kyle in the early 1900's in Brandon Manitoba and had two sons born in Brandon;  Kyle Forster in 1907 and Bryan Forster (my Father) in 1909.  The Family moved to Dysart Saskatchewan in 1910 or so where Frederick Forster owned and operated the Massey Harris dealership and hardware store and was also the Mayor during the WWI years.  He was also the baseball team coach and the manager of the hockey team at Dysart during this period.  He was killed in car accident in 1924 just outside of Cupar Saskatchewan and is buried at Dysart Saskatchewan.  His wife Mary died shortly after an illness  in 1928 and is also buried with him in the family plot at the Dysart cemetry.  They left 5 children as orphans ranging from age 21 to 5 years old.  So you see why a great deal of the family information, particularly about the Brandon
Manitoba years and his youth and military service in the 1890's and early 1900's has been lost over the years.  All I have is the picture below with Frederick Forster, Manitoba 12th Dragoons Regiment 1900 scratched on the back. 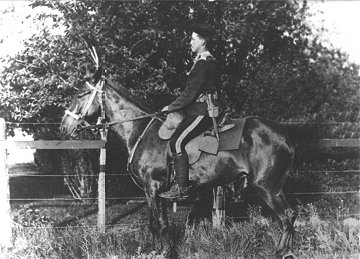 Frederick "Fritz" Forster
Webmaster's Note:
Curator Ross Neale and his army of volunteers spent over 12 hours going through the archives but can find no records on Mr. Forster. Barry would certainly appreciate any assistance from our Web readers in his search for information on his grandfather. You may send your correspondence to Barry via myself. The Hillmans:
I came across your Manitoba Dragoons web site last Friday in the course of pursuing some modest research into Canadian military saddles. To my surprise and delight I found the picture of the saddle in the museum, and then I found the letter from Barry Forster with the picture of his grandfather, mounted on a saddle of the very design in which I am interested.   I could not, however, find an e-mail address for the museum so that I could contact it directly. If you could advise me to whom I
should be writing/talking who might be able to tell me more about the museum's saddle I would appreciate it very much. I have enquiries out all over the world on this matter but to date have no responses, apart from some very useful information from Australia.  I have a saddle which appears very silmilar to both the museum's and that in the Forster picture and want to find out more.
P.S.: Imagine my surprise to open Saturday's Vancouver Sun and discover the feature story about your family.  I am an editor at The Sun.