In 1940, as Nederland became involved in the second world war, I was 9 years old.
Still I can very well imagine how this appeared to me.
Early in the morning on the 10th of May, we awoke by explosions.
My father was explaining that this meant war and that the bridges were destroyed.
It was an odd day; he was not going to work, but was very curious on how the state of the bridges would be. For that reason he took his bicycle to have a look.

After much nagging, I was allowed to come with him on the carrier. First we went to Slagharen, where the bridge across the Krimvaart  canal was totally wrecked. The roadway of it layed crinckled in the water. Thereafter we drove to the bridge at the branch of the Lutterhoofdvaart with the Dedemsvaart (called "Schrijvers' Bridge"). There the roadway was released from its hinge points, just hanging at only one chain on the pile. It was impossible to cross over.
On we went to the Tram Bridge near the potato flour Factory. This one was not demolished.
It was there that we saw the first German soldiers with bicycles. A couple of scouts had surveyed Schrijvers' Bridge and were on their way back. "Look", my dad said, "those are Huns". For me as a schoolboy it was a strange experience. I then had a funny impression. For me it were no human beings walking overthere; in my imagination they were a kind of "men in the moon". Small shaped, with pot-helmets deeply over their

eyes. One of them was lurking around, a big pistol in one hand, carrying along his bike with the other hand. The other one had difficulties with his luggage. There was a machine gun bound to his bike and a tripod on his luggage carrier at the back of his bike. Obviously that was not tightened enough, so it frequently fell off and the soldier had to lug it up frequently.

We had stopped at the Trambrug (Bridge for the steam tram crossing the canal) and were sneaky laughing at them; yet we were a bit afraid. The two Huns placed their bikes at the railing of the bridge and fastened a piece of cardboard on what was printed:
"Brücke gesprengt - linke Seite fahren".
After that they mounted their bikes and drove slowly aslong the south side of the canal in the direction of Dedemsvaart.
Also my dad mounted the bike and I jumped behind him and we went home.
I don't know if my father went to work after that.
Still I remember that I with a couple of friends looked from a distance as the first German troops of soldiers in horse waggons with their rifles between their knees,  drove from the Jachthuis road to Dedemsvaart.

Lateron came tanks; one of them picked a piece from the wall of a barn, close to the road. Also I remember that earlier that morning some Dutch army trucks with dead or wounded drove fast in westerly direction, obviously before the bridges were demolished. In fact it is odd; it is almost 60 years later but in my memory it seems to be happened not long ago.

In a small village like Lutten, in the beginning it was hardly experienced that a war was going on. Live was almost the same as before. We didn't come in touch with the Germans very much. At home we had no radio, so all you heared about the war was from news papers. Those articles were blown up by the German Propaganda. We read about German successes and about how many BRT (bruto register ton) of ships were sunken by German U-boats (submarines).
As the Huns took  more sharp measures, time changed. There was rationing of goods, mainly food stuff and textiles, shoes etc. Also the German "Arbeitseinsatz" forced our young men to be employed in the Armament Industry in Germany. Many of the boys were hiding, so you saw strange faces in the village. Everybody knew they were "onderduikers" (hiding for the enemy) but nobody spoke about.
The years 1943 and '44 impressed me the most. Bombing raids to Germany started; in the advance mostly at night but lateron also at daytime in clear skies.

At about ten o'clock in the morning you could hear the humming in the distance, swelling and then you saw the large flights of Liberators and B-17 Flying Fortresses, followed by white condensate stripes.
Later in the afternoon they came back, mostly spreaded and less in number. Now and then a bomber flew over, damaged by the Flak and very low and sometimes dropped its bombs in the neighbourhood.
This excited my interest for aircraft and aviation. I collected alot of aviation stuff and purchased books in the bookstore. After the war, as we moved from one place to another, I lost everything.
Now and then an aircraft crashed in the surroundings and we as schoolboys sniffed around to collect souvenirs. Mostly we were chased by German guards.
On "Dolle Dinsdag" (wild Tuesday) everyone thought that our liberators were coming and nobody had suspected that it would last until April 1945.
We, in the country, didn't starve. We had food (potatoes, vegetables and fruits) from our garden and had chicken or rabbit for meat.
Nevertheless there was lack of textile, soap and other things, so everybody suffered.in the last winter war time.

On the sixth of April 1945 the village of Lutten was liberated. From Ane at almost 11.30 a couple of Canadian armoured cars arrived. Obviously they were told that Germans were in the school, as they halted in front of the school yard and aimed arms at the building. At that moment one of the prisoners ran out and yelled to hold fire as the Germans already had left to hide in the meadows behind. The Canadians drove back a few houses and fired alongside at the German fugitives. With help of BS-men (Underground Dutch Army) the SA-men were took from the meadows and captured by the Canadians.

The Eastern part of Nederland was liberated by the Canadian 18th Armoured car Regiment (the "XIIth Manitoba Dragoons"). This was a Cavalry scouting Regiment. The members were mainly from the Canadian province of Manitoba and the eastern part of Saskatchewan. Commander of the Regt. was Major Patrick C.R. Black.
In April 1945 the A-squadron, consisting of 5 Fighting Groups : 1st, 2nd, 3rd, 4th and 5th Troop an Assault Troop, an Administrative Group and a Headquarters Troop, was operating near Hardenberg..
Every Fighting Troop had disposal of 4 armoured cars: Scout Car (Lynx), Lead Car (Staghound), Second Car (Staghound) en Scout Car (Lynx).
Furthermore there were the B, C and D squadron and a RHQ squadron (head quarters and communication)..
The Staghound was manned with 5 men: commander, driver, radio-operator, gunner and bow-gunner/second driver. In the Lynx were 2 men: car-commander(gunner-radioman) and a driver.
The Staghound had a turret with a quick-fire cannon and an MG, also an MG in the bow.
Their main task was to capture bridges and main road crossings, to clear the ways for the march of the Army Group. 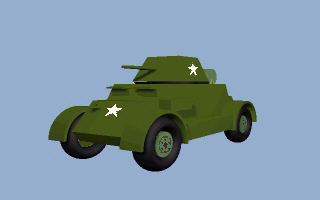 
Friday, April 6, 1945.
The A-squadron had spent the night in the neighbourhood of the Hoogeweg near Hardenberg, at the east side of the canal. At 10.25 A.M. they crossed the canal, after citizens had repaired the bridge the day before. The third troop went to the direction of Gramsbergen that had code name "Collar". At 11.25 was announced by radio to HQ that the bridge on the river Vecht  was in tact and suitable for heavy traffic. They then went along to Lutten (code name "Tile")  where they halted opposite the school. Here 8 prisoners of war were taken.

In the Christian School at Lutten were tenths of so called "political prisoners". These people were guarded by a couple of SA-members in brown uniform with Swastika arm-bandages. ("Braunhemden"). The prisoners had to dig trenches and MG-fortifications. Speaker of those people was Mr. Gebuijs, who ran towards the Staghound, shouting: "Don't fire! Here are prisoners and the Germans are hiding in the meadows". After some cannon and MG firing between the houses the Germans were captured with help of BS-men (Neth.underground forces). Eight SA-men were taken prisoner of war; one of them had a graze at his bottom.

The War Diary furthermore announces that the 3rd Troop near Lutten had a fight with Germans, in which 10 enemies were killed. At 14.00 h was announced that the enemy had withdrawn into the Heemserbos (Forest near Heemse).

As far as known, the storm troop did not move towards Hardenberg-Heemse, but in the direction of Dedemsvaart. In stead of "Heemserbos" probably is meant "Colenbranders Bos". Not mentioned is that one of the armoured cars, from a position near the Mill, shot a German vehicle, approaching Lutten via the "Modderwijk" (now Jachthuisweg) behind the Potato Flour Factory. This car was shot in fire, whereby one Hun*) was killed and another captured.
In the afternoon of this memorable day, the 6th of April, 1945, the Troop withdraw to Ane (Gramsbergen) and a fearful night followed for the people of Lutten.
A group of fleeing people from Dedemsvaart, following the Canadians, warned that the Germans would come back. Fortunately this didn't happen.
The day after, as the Canadians liberated the surroundings to Dedemsvaart, people felt free and safe.
Everywhere flags were hoisted and citizens weared orange buttons and bows.
Lutten was free!

*) buried as "unknown German soldier" at the cemetery of Lutten.