Update on the Staghound restoration
Most photos may be clicked to larger full-screen size
After the Staghounds restoration, I concentrated on collecting photos and information from this armored car and from the regiments which used it in WWII. Countless hours were spent searching in Canadian, British and Dutch archives, corresponding with museums, veterans, Dutch historical societies etc. and collecting historical books and publications. The following article is a result from this search.

Around mid-1945, the demobilizing Canadian army brought its surplus vehicles to Demob Vehicle Parks in Holland located at Deelen, Stroe, Enschede and Soesterberg.
The  XII Manitoba Dragoons (XIIMD) turned in all their AFVs  to "a depot at Arnhem Airport" on 5th July 1945. 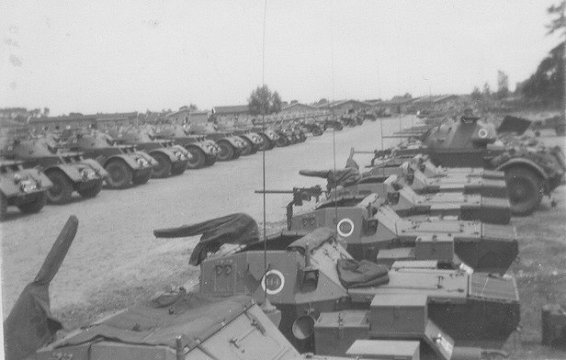 The Dutch army had to be re-equipped which was mainly done by using vehicles from Canadian stock. All (around  72) XIIMD Staghounds went to the Dutch army. In total they got 108, the balance mainly coming from the Royal Canadian Dragoons.

On 18th June 1945 the Pantserschool (Armoured vehicle school) was formed under the leadership of Major (later Brig.Gen)  J.J.G. Beelaerts van Blokland. Initially it was established in the Prinses Irene Barracks in Bergen op Zoom, but when the Pantserschool expanded, it moved to the Willem III Barracks in Amersfoort at the end of 1945. There it finally expanded to three squadrons Huzaren van Boreel.

On May 10th 1946, the Pantserschool had two operational Staghounds, F235320, F235371 and one inoperational car with number F235342. In the following months, more vehicles were added and were renumbered using a 5-digit system. My Staghound was registered 34909, the number was found on the hull hidden underneath some layers of green paint. No photos from the car in that period have been found till now.

Around 1950, the Dutch army had two armored car squadrons, 1st and 2nd Eskadron Pantserwagens (Armored Car Squadron), so it could be it served in one of these or was held in reserve. In 1958, Dutch army vehicles got new registration numbers in the form of license plates. At that time, the number of operational Staghounds was down to 31 as many had been scrapped or converted for a static role as airfield "bunker" fortifications. The registration number range allocated to the Staghounds was KN-32-82 to KN-33-12.

The wartime task for these squadrons was defending the Dutch military airfields in the southern part (441) and western (440) part of the country. Spare parts were always in short supply and as time went by, it got more difficult to keep the Staghounds operational and in 1964 both  440 and 441 Eskadron Pantserwagens were demobilized. 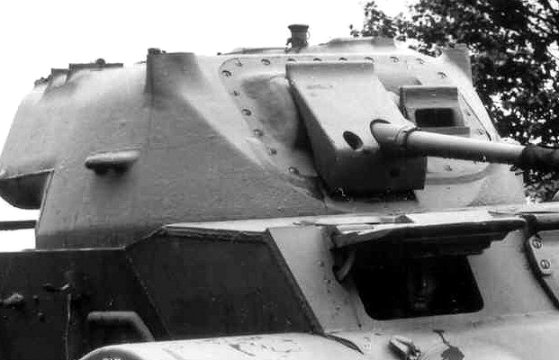 Detail from previous photo for comparison with photo below. 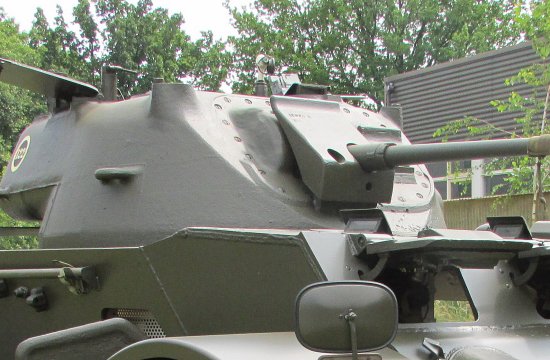 On the car, some wartime modifications were found indicating that 4-Ft. wading equipment and   12ft No9 trackways had been installed.

Details from the wading equipment can be found in Chilwell Catalogue 72/533 titled 4-Ft wading instructions for the armoured car, Staghound, (T.17.E.1.). 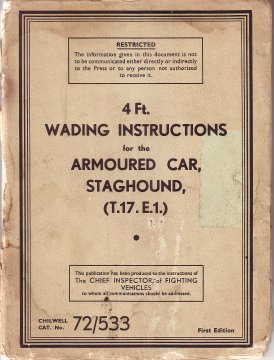 Page 2 from wading instructions with foreword mentioning some of the preparations.

Installing the wading equipment was a major modification. It  involved removing the jettison fuel tank system, work like flame cutting and welding various brackets to the hull and sealing every potential leaking point. The modification took a few weeks to carry out, therefore, only Staghounds actually assigned to a fighting unit were modified.

The work was done by the XIIMD themselves with the assistance from  specialist welders and fitters  from 40 Light Aid Detachment. The job started on May 19th 1944 and finished in June whereafter the equipment was submerged and checked in special test basins in Maresfield, U.K..

Modifications still visible on the car are the 90 degree bent rear steps, the cut air intake cowl, the chiseled-off crowbar bracket and the welds that attached the air exit duct to the rear of the car. Also, sealing compound was found in a few places.

As I have never seen a RCD Staghound with the 4 ft wading equipment, things started to point in the direction from XIIMD.

Photo from the  lower rear armor plate showing the 90 degree bent steps and
the remains of the welds from the air exit duct mounting bracket.

Photo showing flame cut edge from cover over air inlet.
The location of the now missing crowbar bracket was at the center bottom from the photo.

The "12ft No9 trackways" were developed by XIIMD when they trained in the U.K. and were also used by other Canadian and British regiments for crossing small streams. In  XIIMD, every fighting troop (2 Staghounds, 2 Ford Lynx Scoutcars) and every heavy troop (2 Staghounds, 1 Ford Lynx Scoutcar) had one set of these aluminium  trackways. They could have been used in squadron headquarters also but I have no information confirming this.

There were 20 fighting troops and 4 heavy troops, so there were at least 24 sets of trackways. The trackways were carried by the 2nd car, also known as "Sergeants Car." For mounting the trackways on the car, a support was welded on the hull sides. Later, in some cases, a cross-bar was welded on top of the armor plate above the drivers and co-drivers heads for the same purpose. Other crews just strapped the trackways on their car with chains and/or leather/canvas straps.

On the roof plate above the driver and co-driver, two rows of welds about 50mm apart were found. Initially no attention was paid to this, thinking it was a Dutch modification, but with the later knowledge about the trackways, it was clear that the welds were once holding the crossbar supporting these trackways.

Identification
Although the direction in which to search was clear, finding a good wartime photo from my Staghound would be very fortunate. But the time spent researching finally paid off. The Dutch National Archives in The Hague has a large collection of wartime photos. In this archive there are some photos from the Canadian army parade held in Amsterdam on June 28th 1945 when Queen Wilhelmina visited the city. XIIMD participated with all their 72 Staghounds and 20 Ford Lynx Scoutcars. One of these photos is shown below.

The two welds on top of the roof plate immediately draw my attention.

The original photo is very detailed and it is possible to compare welding details, casting irregularities and other details with the details on my car. This gave at least 15 exact matches (and no mismatches) and the car could be identified as a XII Manitoba Dragoons vehicle serving as Sergeants Car No 122 with 12th Troop (C-squadron). The War Department Census number was F215633.

It turned out there are more photos (shown below) from this Staghound.

Photo taken around 20th March 1945 in the van Eijkhovenstraat  in Dreumel, Holland.
Three men on the photo are from Westminster Regiment
and one from XIIMD (2nd from the right), names unknown.
Courtesy The Royal Westminster Regiment Historical Society and Museum, Mr. Terry Leith.

Photo from F215633 C122 made on September 12th 1944 in Dudzele,Belgium,
a village between Brugge and Zeebrugge.
The location is on the Dorpsplein. The houses on the left are still there.
Source: N.S.B. Dudzele.

A short moment later this photo was taken at the junction "Dorpsplein"  "Zwaanhofstraat."
The house and garage are  still there and barely changed.
Source: N.S.B. Dudzele.

In September 1944 the XII Manitoba Dragoons started a Regimental Scrapbook which grew to a 500 page document at war's end. 12th Troop also wrote a short summary on their experiences and it is obvious that they had a rough start losing their Lieutenant Peter R. Page (wounded  on August 12th 1944, died August 13th 1944). The sergeant on the car was Sgt C.N. Schaldemose who was also wounded on the 12th but returned to the unit around October 1944. The new troop leader was Lt. W.G. McCulloch. Other names from 12th Troop are gunners Tpr. Martin Siegfried and W. Petrynko, L/Cpl. D.E. Spencer,  L/Cpl. Swanson. Later Lt. Clifford H. Hill became 12th Troops leader. 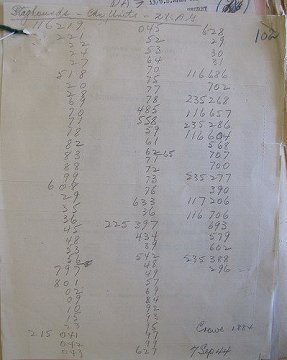 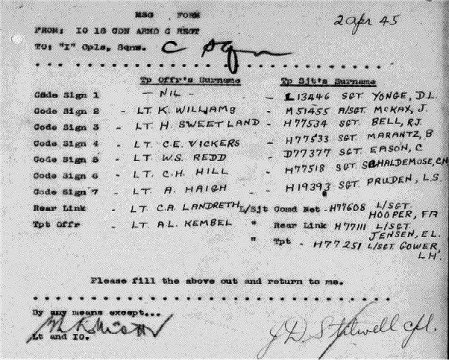 BACK TO THE DRAGOONS
CONTENTS PAGE
www.12MBDragoons.com