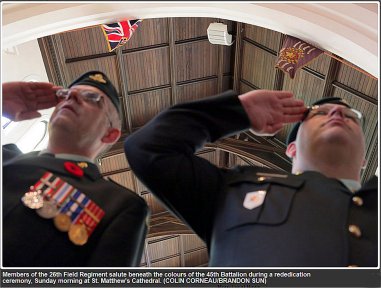 Standing salute
Members of the 26th Field Regiment salute beneath the colours of the 45th Battalion
during a rededication ceremony at St. Matthew's Cathedral.

The gun will be dedicated to the memory of LCol Ross Thompson, CD
and all the soldiers who have served
26 Fd Regt RCA "Past Present and Future".
.

D-Day saw a big change in Europe and also in Brandon. Brandon had losses all during the war but now things went into high gear. We lost three Brandon boys that day.

Rifleman KENNEDY, ALLAN JOSEPH H/103100. A Manitoba service number, but we do not know how he ended up in the Regina Rifle Regiment. Many Brandon boys served in units from all over Canada. Brandon's former alderman of the '50s and '60s -- J.M. Shurb was a Sgt. with the Regina Rifle Regiment having been transferred from the Royal Winnipeg Rifles to teach rifle shooting. There are many reasons for serving with more distant units.

Rifleman WORONCHUK, EUGENE J. B/142310 (the B is probably a typo and it should be an H) Royal Winnipeg Rifles. This stocky fellow was also a wrestler who was popular in Brandon at that time. He showed up one evening at his girls' home to say good-bye as they were shipping the RWR out the next day. He said that he would not return. The girls there all said for him not to take that attitude but he had already lost his neighbor on Eighth Street North to an ammunition accident in training and had a bad feeling.

That neighbour, Rifleman PURPER, WILLIAM H/41015 Royal Winnipeg Rifles, had died at Shilo on 11 May 1940. In June of 1944 the girls, including his pal, were spending a warm evening singing. Another girl ran over saying, "The family just got news and Woronchuk has been killed." The girls never sang again during the war.

Corporal KLOS, WALTER JOHN H/41048 Royal Winnipeg Rifles. Raised on Twelfth Street North, Klos had ended up as a mucker in the mines of Flin Flon. This is copied from the book Juno by Ted Barris and tells of Cpl. Klos's last moments on Juno beach. The Winnipeg's 'B' Company, and the Royal Canadian Engineers 6th Field Company assault team working with them, had one of the highest beach casualties of the day. The company had lost almost three-quarters of its men. Their courageous company commander, Captain Gower, was left with only twenty-six men. A pill-box on the west side of the Seulles River contained a 75 mm field gun and a very large anti-tank gun. A story of unimaginable courage took place near this pillbox. It concerned Corporal W.J. 'Bull' Klos. "Rushing the enemy, 'B' Company encountered heavy enemy fire. Corporal Klos, badly shot in the stomach and legs while leaving the assault boat, made his way forward to an enemy position. Men fell all around him as Corporal Klos thrashed through the deep water. Klos was a big, powerful man. Thus the nickname Bull. The corporal's rage was greater than his pain. He staggered to the beach and shot an enemy gunner. Despite being wounded, he engaged in hand-to-hand combat with three German soldiers he came across in a pill box. He knifed two of them and was strangling the third with his bare bands when he was killed. His hands still gripped about the throat of his victim produced a chilling sight!"

A lady that lost her brother, a Flying Officer told me what it was like on Tenth Street North where the family lived at that time. In the summertime with windows open the sound of the telegraph boy's bicycle bell could be heard. The shout went out and was spread street to street in all directions. The mothers or wives walked to the front gate to wait. Where would the telegraph boy go? For the unlucky ones he turned onto their street and then stopped at their gate. With a telegram coming for every injury, every sickness, every wound, every "missing in action", every "taken prisoner", and every death this began a time of much increased dread for the families on the home front. And so it was from D-Day until after the war and the boys came home.